For Catholics, a Door to Absolution Is Reopened 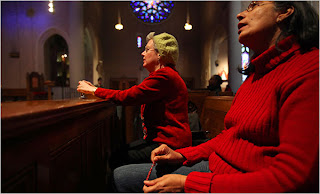 The announcement in church bulletins and on Web sites has been greeted with enthusiasm by some and wariness by others. But mainly, it has gone over the heads of a vast generation of Roman Catholics who have no idea what it means: “Bishop Announces Plenary Indulgences.”

In recent months, dioceses around the world have been offering Catholics a spiritual benefit that fell out of favor decades ago — the indulgence, a sort of amnesty from punishment in the afterlife — and reminding them of the church’s clout in mitigating the wages of sin.

The fact that many Catholics under 50 have never sought one, and never heard of indulgences except in high school European history (Martin Luther denounced the selling of them in 1517 while igniting the Protestant Reformation), simply makes their reintroduction more urgent among church leaders bent on restoring fading traditions of penance in what they see as a self-satisfied world.

“Why are we bringing it back?” asked Bishop Nicholas A. DiMarzio of Brooklyn, who has embraced the move. “Because there is sin in the world.”

Like the Latin Mass and meatless Fridays, the indulgence was one of the traditions decoupled from mainstream Catholic practice in the 1960s by the Second Vatican Council, the gathering of bishops that set a new tone of simplicity and informality for the church. Its revival has been viewed as part of a conservative resurgence that has brought some quiet changes and some highly controversial ones, like Pope Benedict XVI’s recent decision to lift the excommunications of four schismatic bishops who reject the council’s reforms.

The indulgence is among the less noticed and less disputed traditions to be restored. But with a thousand-year history and volumes of church law devoted to its intricacies, it is one of the most complicated to explain.

According to church teaching, even after sinners are absolved in the confessional and say their Our Fathers or Hail Marys as penance, they still face punishment after death, in Purgatory, before they can enter heaven. In exchange for certain prayers, devotions or pilgrimages in special years, a Catholic can receive an indulgence, which reduces or erases that punishment instantly, with no formal ceremony or sacrament.

It has no currency in the bad place.

“It’s what?” asked Marta de Alvarado, 34, when told that indulgences were available this year at several churches in New York City. “I just don’t know anything about it,” she said, leaving St. Patrick’s Cathedral at lunchtime. “I’m going to look into it, though.”

The return of indulgences began with Pope John Paul II, who authorized bishops to offer them in 2000 as part of the celebration of the church’s third millennium. But the offers have increased markedly under his successor, Pope Benedict, who has made plenary indulgences part of church anniversary celebrations nine times in the last three years. The current offer is tied to the yearlong celebration of St. Paul, which continues through June.

Dioceses in the United States have responded with varying degrees of enthusiasm. This year’s offer has been energetically promoted in places like Washington, Pittsburgh, Portland, Ore., and Tulsa, Okla. It appeared prominently on the Web site of the Diocese of Brooklyn, which announced that any Catholic could receive an indulgence at any of six churches on any day, or at dozens more on specific days, by fulfilling the basic requirements: going to confession, receiving holy communion, saying a prayer for the pope and achieving “complete detachment from any inclination to sin.”

But in the adjacent Archdiocese of New York, indulgences are available at only one church, and the archdiocesan Web site makes no mention of them. (Cardinal Edward M. Egan “encourages all people to receive the blessings of indulgences,” said his spokesman, Joseph Zwilling, who said he was unaware that the offer was not on the Web site, but would soon have it posted.)

The indulgences, experts said, tend to be advertised more openly in dioceses where the bishop is more traditionalist, or in places with fewer tensions between liberal and conservative Catholics.

“In our diocese, folks are just glad for any opportunity to do something Catholic,” said Mary Woodward, director of evangelization for the Diocese of Jackson, Miss., where only 3 percent of the population is Catholic.

Even some priests admit that the rules are hard to grasp.

“It’s not that easy to explain to people who have never heard of it,” said the Rev. Gilbert Martinez, pastor of St. Paul the Apostle Church in Manhattan, the designated site in the New York Archdiocese for obtaining indulgences. “But it was interesting: I had a number of people come in and say, ‘Father, I haven’t been to confession in 20 years, but this’ ” — the availability of an indulgence — “ ‘made me think maybe it wasn’t too late.’ ”

Getting Catholics back into confession, in fact, was one of the motivations for reintroducing the indulgence. In a 2001 speech, Pope John Paul described the newly reborn tradition as “a happy incentive” for confession.

“Confessions have been down for years and the church is very worried about it,” said the Rev. Tom Reese, a Jesuit and former editor of the Catholic magazine America. In a secularized culture of pop psychology and self-help, he said, “the church wants the idea of personal sin back in the equation. Indulgences are a way of reminding people of the importance of penance.”

“The good news is we’re not selling them anymore,” he added.

To remain in good standing, Catholics are required to confess their sins at least once a year. But in a survey last year by a research group at Georgetown University, three-quarters of Catholics said they went to confession less often or not at all.

Under the rules in the “Manual of Indulgences,” published by the Vatican, confession is a prerequisite for getting an indulgence.

Among liberal Catholic theologians, the return of the indulgence seems to be more of a curiosity than a cause for alarm. “Personally, I think we’re beyond the time when indulgences mean very much,” said the Rev. Richard P. McBrien, a professor of theology at Notre Dame who supports the ordination of women and the right of priests to marry. “It’s like trying to put the toothpaste back in the tube of original thought. Most Catholics in this country, if you tell them they can get a plenary indulgence, will shrug their shoulders.”

One recent afternoon outside Our Lady Queen of Martyrs Church in Forest Hills, Queens, two church volunteers disagreed on the relevance of indulgences for modern Catholics.

Octavia Andrade, 64, laughed as she recalled a time when children would race through the rosary repeatedly to get as many indulgences as they could — usually in increments of 5 or 10 years — “as if we needed them, then.”

Still, she supports their reintroduction. “Anything old coming back, I’m in favor of it,” she said. “More fervor is a good thing.”

Karen Nassauer, 61, said she was baffled by the return to a practice she never quite understood to begin with.

“I mean, I’m not saying it is necessarily wrong,” she said. “What does it mean to get time off in Purgatory? What is five years in terms of eternity?”

The latest offers de-emphasize the years-in-Purgatory formulations of old in favor of a less specific accounting, with more focus on ways in which people can help themselves — and one another — come to terms with sin.

“It’s more about praying for the benefit of others, doing good deeds, acts of charity,” said the Rev. Kieran Harrington, spokesman for the Brooklyn diocese.

After Catholics, the people most expert on the topic are probably Lutherans, whose church was born from the schism over indulgences and whose leaders have met regularly with Vatican officials since the 1960s in an effort to mend their differences.

“It has been something of a mystery to us as to why now,” said the Rev. Dr. Michael Root, dean of the Lutheran Theological Southern Seminary in Columbia, S.C., who has participated in those meetings. The renewal of indulgences, he said, has “not advanced” the dialogue.

“Our main problem has always been the question of quantifying God’s blessing,” Dr. Root said. Lutherans believe that divine forgiveness is a given, but not something people can influence.

But for Catholic leaders, most prominently the pope, the focus in recent years has been less on what Catholics have in common with other religious groups than on what sets them apart — including the half-forgotten mystery of the indulgence.

“It faded away with a lot of things in the church,” said Bishop DiMarzio. “But it was never given up. It was always there. We just want to people to return to the ideas they used to know.”

By Lee Smith ( Pastoral Ponderings of an Energetic Exegete ) Jesus has become a popular figure in American culture. Few people in America today could claim that they never have heard of the man named Jesus. Writers write about him, singers sing about him, and many profess to follow him. He even makes appearances on television shows and movies. He serves as the center of the liturgy in just about every Protestant and Catholic church. However, in my own study of the Gospels which document the life and work of Jesus, it appears that the common perception of Jesus is much different than the Jesus described in God's Word. Many churches and denominations that place Jesus as the center in their worship services and life are not worshiping the same Jesus that we discover in the Bible. Not Merely A Great Moral Teacher A popular view of Jesus is to regulate Him to a great moral teacher who provides instructions for how man should live his life. While it is true that much wisdom can be g

Knowing the Nature of Your Evil

It is important that we know the nature of the evil in our hearts. Do you think the essence of your evil is disobeying commandments? That’s a good start. But it’s not the essence of our evil. Commands simply name the evil and its fruits, and tell us not to do them. The essence of our evil is that we prefer anything to God (Romans 1:23; 2:23). Commands do not create the possibility of evil. Commands name it. Long before we are told not to covet, we covet. Disobeying the command, “Thou shalt not covet,” is not equivalent to the evil of coveting. The evil of coveting is there first, and then is compounded by the transgression of the commandment not to covet. Paul said, “I would not have known what it is to covet if the law had not said, ‘You shall not covet’” (Romans 7:7). That is, I wouldn’t have known the seriousness of my evil if God had not named it in the law. But lawbreaking is not the essence of my evil. Desiring anything above God is the essence of my evil, before any command