A Conversation Between a Pastor and a Postmodern 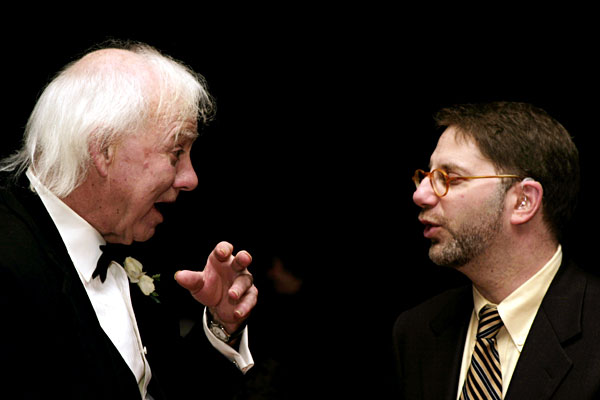 The following conversation is completely fictional but is based on several claims that someone with a postmodern worldview typically holds (not necessarily everyone who accepts the label "postmodern"). The intent of the following is twofold. With this dialogue I hope to show the weaknesses of the postmodern mindset as well as how to answer someone who espouses such claims. Many times we are confronted with these arguments and fail to know how to respond. The following is just one example of how one may respond in a similar situation.

Postmodern: Pastor, I regret to inform you that I am leaving your church.

Pastor: Why? You are an important part of the congregation. What has prompted you to leave? Is it one of the other members? Is it me?

Postmodern: Don't get me wrong, pastor. You are a nice guy and you really care about your flock but I just get so tired of your absolute statements in your sermons. It is like you consider no other position as valid with the exception of your own.

Pastor: What do you mean? Do you feel that I am too dogmatic on certain problem passages or controversial doctrines?

Postmodern: No. It is more than that. You speak as if the Bible is the only truth and that Jesus is the only way to salvation. You don't even consider the other views and how they might also be true. You are very intolerant!

Pastor: During my time in college I was on a quest to discover the truth and God has opened my eyes to see that the Bible is true. I have weighed out all the evidence and thoroughly examined it and have yet to find it false. Furthermore, the Holy Spirit has convicted me of its truth.

Postmodern: I have no problem that you believe the Bible to be true. My issue lies with your claim that Muslims are wrong in their understanding of the Koran as truth and that everyone is wrong who does not believe that Jesus is the only way of salvation. What right do you have to make these claims?

Pastor: Well if the Bible is true, as I am convinced it is, then it must be God's Word as it claims. This means that God is the one who makes these claims and He clearly has the right to determine what is right and wrong. The Bible explicitly states and affirms Jesus as saying that He is the way, the truth, and the life. No man comes to God but through Him. Therefore, God has declared that Jesus is the only way to salvation.

Postmodern: Based on the presupposition that the Bible is true, that is correct. But my issue is the validity of that presupposition itself. Why can't there be many ways to heaven instead of just one?

Pastor: Do you realize that every religion claims to be right? Islam claims the Koran is the only holy book without any perversions and thus is fully true. Islam views Jesus as not being the Son of God and never having died which are complete contradictions to the Bible. The Bible's teaching and those of the Koran cannot both be true. Jesus either is the Son of God or He is not. Is Jesus the only way as the Bible states or the Five Pillars of Islam according to the Koran? They both cannot be the only way as they each claim. One is either right or they both are wrong. They both cannot be right because they contradict. In fact, every religion presents their set way as the only way. Buddhism has the Eightfold Path to Enlightenment and Hinduism has several rituals and washings. Even the Roman Catholics have historically held to the position that there is no salvation outside the Catholic church. They each have their own and only way to heaven and apart from that way, no one may enter their conception of heaven (which also is contradictory of each other). So, basically all religions are intolerant of each other. The question boils down to which one of these ways are the true one since they all cannot be.

Pastor: So then how can you be so certain of the impossibility of knowing the truth?

Postmodern: What do you mean?

Pastor: You seem awfully certain that you cannot be certain of anything.

Postmodern: I believe that truth is relevant. There is no absolute truth. Each individual decides what is true for him or herself but it is not absolute.

Pastor: Here is another problem with this thinking. For your statement that "there is no absolute truth" to be valid, it would have to be an absolute truth which would then invalidate such a claim. I also don't think you fully believe what you say.

Postmodern: What makes you say that?

Pastor: You claim that everyone determines their own truth so that it is true only for the individual, right?

Postmodern: That is correct.

Pastor: So, in your perspective, there is no universal morality all men subscribe to?

Postmodern: No. What they believe to be morally right or wrong is relevant only to them.

Pastor: So does that mean that a man could take your wife out tonight and do whatever he desires with her?

Postmodern: Absolutely not! That would be a violation of . . .

Pastor: But what if he viewed that as right in his own eyes? You certainly could not tell him it was wrong. After all, it was deemed right to him.

Postmodern: I have to admit Pastor, you are pretty good with logic. It becomes wrong with one imposes his or her beliefs or understandings onto someone else. This would be wrong because he would be imposing his belief (not necessarily a wrong belief for him) on me when I don't agree with his perspective. This in essence is my problem with your teaching and preaching.

Pastor: So you do not hold to any kind of objective, authoritative, universal standard such as the Bible?

Postmodern: Nope. I believe what matters is that one sincerely believes in something, whether that would be Jesus or Buddha or that no such higher being exists, and that he or she does not impose that belief onto anyone else.

Pastor: But to sincerely believe in something does not necessarily make it true. If I sincerely believed that I could fly and I in turn jumped off the roof of an 18 story building, it does not change the fact that I am not able to fly, does it? Even if I believed with all my heart that I had the ability to fly it would not alter the laws of gravity and my inability.

Postmodern: You've got a point. But we all know the truth that one cannot fly because of the experience of the laws of gravity and any attempts to fly. How have we experienced the truth of God?

Pastor: Oh you have seen His handiwork but still failed to recognize Him! The Bible says that God has revealed His power, characteristics, and divine nature through the creation. You cannot sit through a thunderstorm without witnessing this power or gaze upon a sunset without being in awe of His majesty. You just don't acknowledge the Creator behind the creation. In fact, the Bible points out that one day all of us will stand before God in judgment. It has been "appointed a man once to die and then the judgment." Because of the evidence of Who God is in the works that He has created, you will have no excuse for your rebellion against glorifying and praising Him. However, creation does not tell the whole story of who God is and His great work of redemption that is necessary because of the sin that currently separates you from God. He has specifically revealed all of this in His written Word, the Bible.

Postmodern: Alright Pastor. You have made some powerful points but you have yet to convince me of the truth of Scripture. I will continue to study the Bible and come to you with any further questions I may have.

Pastor: Postmodern, I would never be able to convince you the truth of the Bible being God's Word because only God's Holy Spirit can do that. However, I strongly encourage you to consider what I have said, both in this current conversation as well as what I have taught from God's Word on Wednesdays and Sundays. I will continue to be praying for you that God will open your eyes to the truth and draw you into a relationship with Him. Thank you for the conversation.

Postmodern: No. Thank you Pastor!